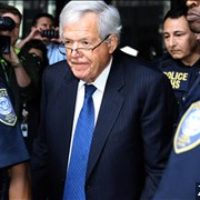 Mal Meyer — Jul. 18 2017
CHICAGO (AP) — Former U.S. House Speaker Dennis Hastert has been released from prison in Minnesota and transferred to a Chicago re-entry facility, according to Federal Bureau of Prisons records Tuesday.

Hastert was sentenced to 15 months in prison in April 2016 in a banking violations case that revealed accusations he had sexually abused teenagers while coaching wrestling at a suburban Chicago high school.

The 75-year-old Republican is no longer at the Minnesota federal prison where he began serving his sentence on June 22, 2016, but is at a Chicago residential re-entry management office, online records showed. Hastert’s release date is listed as Aug. 16.

The Illinois congressman-turned-high-paid lobbyist had to serve at least 85 percent of his sentence, or just over a year. It’s not uncommon for inmates to be released early for administrative or other reasons.

Hastert pleaded guilty to violating federal banking law in seeking to pay $3.5 million in hush money to keep the sex abuse secret. He is one of the highest-ranking U.S. politicians to ever go to prison.

U.S. District Judge Thomas M. Durkin branded Hastert “a serial child molester” during his April 2016 sentencing in Chicago. Hastert was never charged with child abuse because the statutes of limitation blocked prosecutors from filing charges dating back to when Hastert coached at Yorkville High School, from 1965 to 1981. Instead, Hastert was charged with violating banking laws.

Messages left for The Bureau of Prisons weren’t immediately returned Tuesday. Prison officials typically don’t discuss the movement of prisoners on security grounds and it’s unclear how long Hastert would have to stay at a halfway house or if he could be transferred to home confinement instead.

Hastert’s health has been an issue. He sat in a wheelchair during his sentencing and used a walker to deliver a statement. He served his term at the 64-acre (26-hectare) Rochester Federal Medical Center, a prison that specializes in care for physically ailing or mentally ill inmates and is near the Mayo Clinic. Hastert nearly died from a blood infection and suffered a stroke after he pleaded guilty on Oct. 28, 2015. He also has diabetes.

Hastert’s sentence includes two years of supervised release, during which he must undergo sex-offender treatment. Prison and health experts have said that treatment will likely include a lie-detector test to determine how many times Hastert sexually abused kids and for how long.