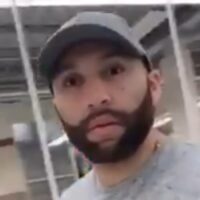 A second former Minneapolis police officer charged in the death of George Floyd is out of jail after posting bail on Friday, and when a shopper at a Cub Foods spotted him, she started recording him in a now-viral video.

According to online records, 26-year-old J. Alexander Kueng posted bail of $750,000 and was released from the Hennepin County Jail, with conditions, at about 7:30 PM Friday. Kueng is charged with aiding and abetting both second-degree murder and manslaughter for his role in the arrest of Floyd, a handcuffed Black man who died May 25th after another officer, Derek Chauvin, pressed his knee to Floyd’s neck.

Another former officer charged with aiding and abetting in Floyd’s death, Thomas Lane, posted bail earlier this month. Chauvin is being held on $1 million bail with conditions at Minnesota’s maximum security prison in Oak Park Heights.