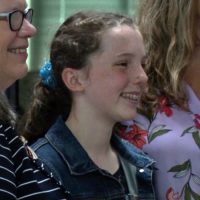 On Thursday, May 9, during a normal school day, Bridget Wells was surprised with exciting news. She had won the National American History Essay Contest by the Daughters of the American Revolution. Today, she was recognized in front of her classmates and DAR representatives.

The Daughters of the American Revolution is a national women’s service and lineage organization that promotes patriotism and historic preservation. They put on an essay contest every year for middle school students.

“We look for the mechanics of writing. We look for knowledge of the topic and then we also look at how it’s put together as a story,” explained Teresa Anderson, DAR American History Committee State Chairman.

As part of the competition, students in grades five through eight were given the chance to think creatively about our nation’s history. This year’s theme was the women’s suffrage movement and the 19th Amendment.

Sixth grader Bridget Wells’ essay won her district. She then traveled to the statewide then national competition, where her essay stood out above the rest.

“We are extremely excited to have Bridget as our national winner. At the state convention excitement was running high ,too. Everyone was really excited about it,” said Carol Curby, DAR Chapter Vice Region.

Now she has been given a once in a lifetime opportunity. On June 20, she will travel with her family to Washington D.C. where she will be honored as the nationwide winner.

While in Washington D.C. Bridget will tour the White House, the Capitol, and read her essay to a group of around 5,000 people.

“I’m really excited to see all those places and to tour them,” added Wells. “I think flying on a plane for my first time is a big part, too.”

Her teachers, school officials, and DAR members are extremely proud of her as she is the first national winner to ever come out of this district.

“We’ve never had a national winner. We’ve had state winners out of Forestview. We’ve gone to districts on two,” added Curby.

“Bridget’s just an awesome student. It’s just a great recognition for her and for all the hard work and effort that she’s put in over the year,” said Forestview Middle School Principal Jon Anderson. “It’s really exciting for her and a great opportunity.”

Bridget is excited for her upcoming trip and is an example that with perseverance and hard work, anyone can achieve their dreams.

“I’m really excited. My sisters and my brother are excited,” said Wells. “We just can’t wait.” 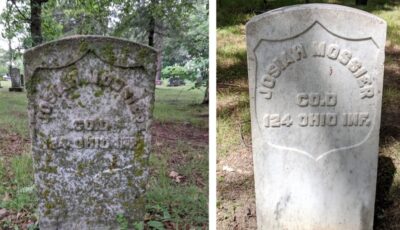 Daughters of the American Revolution Cleaning Tombstones to Honor Veterans