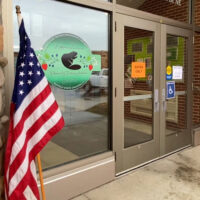 It’s not uncommon to see American flags displayed on Election Day, and in fact, it’s very common at polling places across the state because it is required by state statute.

But one flag that Beltrami County polling officials displayed at Bemidji State University’s American Indian Resource Center, the location of the city’s Ward 1 polling place, was ordered to be removed by BSU president Dr. John Hoffman on Tuesday afternoon.

According to email communication provided to Lakeland News, Hoffman ordered the flag removed because no one on staff had knowledge of the flag being added. He went on to say in the email that the placing of the flag on the building should have been vetted before today and gone through campus processes to ensure all protocols and policies were observed.

Lakeland News reached out to BSU officials for additional comment, and they told us late Tuesday evening that a flag that was affixed to the building was replaced by a flag with a pole outside the door. Election officials noticed that that flag was touching the ground, and they took it inside until they found a way to secure it without having it hit the ground.

For about two hours on Tuesday, while election officials worked to find a suitable way to display the flag, one was not present outside the front doors of the building. Bemidji city clerk Michelle Miller, who made sure the flag was in its proper place when polls opened, told Lakeland News she had no discussion with BSU officials throughout the day and that the flag was removed without her knowledge.