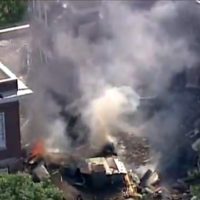 MINNEAPOLIS (AP) — Federal investigators were taking a closer look at the wreckage of a Minneapolis school on Friday after a natural gas explosion sent part of a building crashing down, killing two school employees and injuring at least nine others.

Investigators from the National Transportation Safety Board planned to give an afternoon update on their work, which included going up on a fire ladder truck to get an overhead view of the destruction after Wednesday’s explosion at Minnehaha Academy.

Among the questions being asked by investigators is whether contractors were moving a gas meter at the time of the explosion, said Christopher Hart, an NTSB board member. The NTSB is investigating because it has jurisdiction over gas pipelines.

The bodies of two longtime school workers — receptionist Ruth Berg, 47, and custodian John Carlson, 82 — were found in the rubble. The medical examiner said Friday that both died from blunt force injuries sustained when part of a school building collapsed on them.

A memorial service for Carlson, a part-time janitor known for giving students ice cream treats, is scheduled for Sunday at the school. Services for Berg, who was engaged to be married, haven’t been announced.

Two people injured in the blast remained hospitalized Friday, including one in critical condition.

City fire officials have said the explosion happened in a utility area at the private Christian school, which serves students ranging from pre-kindergarten to 12th grade. The blast affected Minnehaha Academy’s “upper school,” which houses the high school. Administrators have delayed the start of that school by two weeks, to Sept. 5.

Contractors were working in the upper school at the time of the blast, and some witnesses said they were warned of a gas leak moments beforehand. Some first responders also reported smelling natural gas as they pulled people to safety.

As of Thursday, investigators had not spoken with employees of Master Mechanical, the contracting company doing the gas line work. The company was issued a permit in June for “gas piping and hooking up meter” at the school, according to city records.

The permit doesn’t include details on the type of work involved. Master Mechanical said in a statement that its employees were among the injured, but it has not elaborated on the work they were doing.

A representative for the company did not return a message Friday. 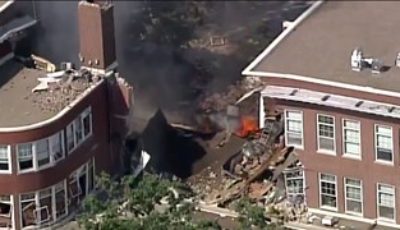