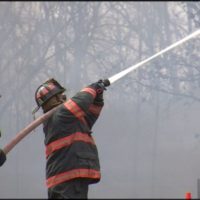 A man who died in a house fire in rural Motley has been identified. Alan Dumpprope, 20, died of smoke inhalation according to the Cass County Sheriff.

The fire on the 12000 block of State Highway 64 was reported on January 13 at 6:42 AM. First responders found a trailer home fully engulfed in flames.

Efforts to extinguish the fire were “immediately underway” according to a department press release. During the fire fighting efforts, an adult male was found dead inside the home.

The cause of the fire remains under investigation with the assistance of the State Fire Marshall’s Office.

In addition to the State Fire Marshall’s office, Motley Fire and Rescue, Staples Fire and Staples Ambulance assisted at the scene.