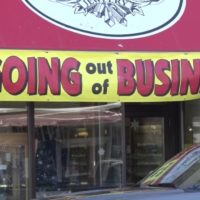 As many communities survive from tourists and seasonal residents in the summer months, those economies greatly diminish during the winter. The potential of jobs and additional people spending in the area has led to support from many communities.

This is the second part of a two part series examining the economic benefits of the proposed Line 3 pipeline. Reporter Mal Meyer talked to some of the proponents of the pipeline.

Not all of the people Lakeland PBS talked to who supported the pipeline would live in a town directly on the proposed route. However, they would live close enough to it and they have such a small economy, that their area would be impacted tremendously.

“Unfortunately, about three years ago, we lost our grocery store so that left us with one less business,” said Lauris Krogstad, the mayor of Gonvick.

Krogstad worked for Enbridge for 30 years, eventually working up to operations at the Clearbrook terminal. Now the mayor of Gonvick a few miles away, he says any additional jobs near the area could revitalize the few town businesses.

“We rely a lot on outside dollars coming in to Govick because we are such a small community. And it means a lot to the businesses and stuff that do still exist here that they could have that income,” said Krogstad.

He says Enbridge given a lot to his small farming community.

“They provided our fire department with emergency equipment. They provided our city with moving equipment and stuff to help us maintain the beautification of the community and cash grants that we receive from time to time,” said Krogstad.

Enbridge frequently does this near pipeline routes for communities. At an individual level, the company says it has voluntarily acquired or bought about 95 percent of private lands on the preferred route.

“Which, I think that this is a strong indication of the fact that the people that would have the pipeline on their property have been, for the most part, very supportive of our project,” said Paul Eberth, the project director for the proposed Line 3 project.

Other cities have profited from the corporation’s presence such as Bemidji, where the current line 3 runs through and home to a regional office. Lori Paris, the president of the Bemidji Chamber of Commerce, says other projects such as the Alberta Clipper helped Bemidji through the recession.

“It was a huge boon to our local economy when nationally everything was in the toilet,” said Paris.

As the businesses close permanently and for the winter, Paris says she worries about the delays in the permitting process.

“And in the mean time we’re missing out on some great economic impact on our community,” said Paris.

In the small township of Long Lost Lake, David Johnson says the county could use the tax revenue for his area of mostly retirees. While the pipeline would not run through his property, it would go through Clearwater county.

He says he further supports the project, as there are different safety guards to pipelines that couldn’t be controlled with trucks or trains to transport the oil.

“Things can happen to pipelines too. But we have to be willing accept a certain amount of risk,” said Johnson.

For Johnson, this project is not just about the local aspects, but national energy independence. He says the major question is- should we be using this natural resource?

“And my answer to that is an unequivocal yes.”

An Enbridge representative says that 1,500 construction jobs will be needed for the project. However, the number of permanent jobs that would be created was not readily available.

Over 1,500 comments were submitted to the public utilities commission about the environmental and economic impacts. The report will also take into account statements expressed during twelve public meetings. A draft of the Environmental Impact Statement is set for April 2017, and is expected to be finished in July.

The first part of this two part series addressing environmental concerns can be found here.