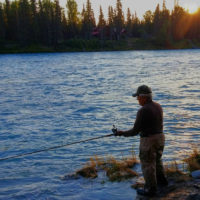 According to a press release from the DNR because of failing infrastructure and excessive energy consumption the Department of Natural Resources is closing a 1970s-era fish hatchery. The French River Hatchery, is located north of Duluth on Lake Superior and needs $8 million in capital investment to address failing equipment. The hatchery consumes 10 percent of the energy used statewide by the entire agency.

Fisheries Chief Don Pereira said that the costly repairs and energy inefficiency make it necessary to close the hatchery. However, the remaining fish production from French River will be continued elsewhere.

“We remain strongly committed to providing great fishing opportunities in Lake Superior and along the North Shore,” Pereira said. “To provide the best fishing we can for anglers, we need to be strategic about how we use energy, and we’re confident we can adjust to meet angler needs with our remaining four hatcheries.”

“Kamloops provide a popular near-shore fishery for Lake Superior anglers,” Pereira said. “We will continue to produce Kamloops at another nearby hatchery until an agreed-upon strategy is reached with the Lake Superior Advisory Group, a group of anglers who work with the DNR on Lake Superior issues.”

Each Kamloop an angler keeps cost $160 to produce under current French River Operations. In order to raise the fish they must first heat Lakes Superior cold water, which makes the hatchery inefficient.