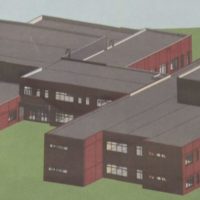 Members of the school board, district principals and county commissioners were on hand with their hardhat and ready to dig into the dirt for the groundbreaking ceremonies on Gene Dillon Elementary School.

The school is named after Gene Dillon, who served on the Bemidji School Board for nearly 25 years. Dillon’s widow, Darlene, was at the ceremony and was touched by the outpouring support.

“I still am having a hard time I say wrapping my head around this because it’s such an honor,” said Darlene Dillon, Gene Dillon’s widow. “I just never ever realized that a school would be named after him.”

Sam Anderson, a civil engineer with Karvakko Engineering, worked on the site design of the school mainly focusing on the outside of the building. He says the new school will be an improvement.

“It’s going to reduce a lot of the impact it has on the current elementary schools,” said Sam Anderson, civil engineer with Karvakko Engineering. “Overall I think it’s giving a lot more space for the students that we have now in the growing school district.”

Gene Dillon Elementary will be 120,000 square feet and serve 600 students in grades 4 and 5. It will also have several gyms and music and art rooms for the community to use.

“We talked at length about what our community needs, what’s in the best interest long term of the community and school district and we came up with a very thoughtful plan to make things better well into the future,” said Dr. Jim Hess, Bemidji School District superintendent.

The school is expected to open its doors for the first day of classes for the 2018-2019 school year.