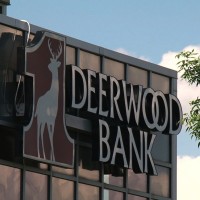 Deerwood Bank opened their vault and hid 5 envelopes around town filled with money. The bank used Facebook and Twitter to send the Brainerd Lakes on a scavenger hunt as a way to promote their bank and get the community involved with local businesses.
Retail Banking Manager Rachel Carpenter says, “You’re going to see the Deerwood Bank does have a lot of fun. Whether it’s with their employees or us tracking kind of community events that are happening in the area. I thought right away that this would be a great tie in for promoting local businesses and local community banking in our area.”
The scavenger hunt consisted of three clues on Facebook and Twitter. The first was sent out last night, “Feeling Luck??? You can place a bet at this location…” Early this morning Deerwood released their second clue, “Locally owned… and they provide great customer service…” Have you narrowed it down yet? The bank’s final clue was “What is a baby bear called?” Give up?
After decoding all 3 clues it lead us to Cub Foods. However we didn’t know if it was Brainerd’s or Baxter’s. Although we guessed right with Baxter the five winners had already beaten us here.
Nancy Marchand, Cub Foods Customer Service Manager, says, “It was all a surprise to me too. It was kind of fast and furious. And yeah it was fun. The people that won were very excited. Oh they were like whoa wooo!”
The prizes from Deerwood Bank were five envelopes filled with a one hundred, fifty or twenty dollar bill. Cub Foods also added gift cards to the envelopes. The first five sharpest Deerwood Banks followers were able to claim an envelope.
Marchand says, “Rachel from Deerwood Bank met me and Jeff here. And gave us some envelopes with some big cash money in them. And wanted us to hand them out to the people who were on Facebook to come in and find the treasure.”
Carpenter, “We chose Cub Foods because they are locally owned just like Deerwood Bank is locally owned. And what a great way to network with those communities and the partnerships that we’ve already built already.”
Deerwood Bank has selected their next location for tomorrow’s scavenger hunt. The first clue is “Dogs are welcomed here..”