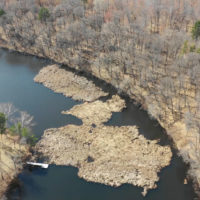 Well, it’s not as big as the one on North Long Lake last year, but another bog is currently causing homeowners to worry on Gilbert Lake in Brainerd.

Since the snow from this brutal winter has melted, the water level on many area lakes has risen, and that can cause some land masses to move. Earlier this week a land mass broke off from the shores of Gilbert Lake in Brainerd, creating a bog that has made it difficult for boats and canoes to get to the other side of the lake.

“This one looks big in the photos, I did a rough estimate on the size and this is probably 75 [feet] by 125 [feet] or something like that,” Kevin Martini, an Aquatic Plant Management Specialist, said.

Comparing the size of this bog to the one that closed the Legionville Safety Summer Camp last year, this one is considerably smaller, but still capable of causing damage to docks and other property.

The DNR does not usually assist with the removal of bogs, simply because they do not have enough staff. However, the DNR does issue permits, and will give advice on what to do with the land mass.

“We will give them permission to either remove it which is usually an expensive option,” Martini said. “The second option is to move it and then stake it down.”

The DNR has issued a permit to the Gilbert Lake Association, and according to the DNR, the lake association plans on moving the bog to the west side of the lake where there is a lot of public land, and they will stake it down there.

“It belongs in the lake, and that’s why we always try and do some sort of compromise that’s going to work out for both parties,” Martini said. “There’s actually a lot of public land on that small basin to the west. So, they’re going to move it into that basin and stake it down there.”

This one is small enough that it should be an easy fix, but it probably won’t be the last bog that we see this year.

“Most of our lakes are in a high-water situation right now,” Martini said. “So, I expect to hear and see more.”

According to their website, the Gilbert Lake Association is planning a meeting for tomorrow, April 26th to further discuss their plans with the bog.