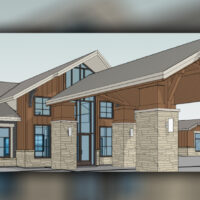 Ground will be broken for the new 45,000-square-foot nursing home as an additional wing on the Heartwood campus across Highway 210 from CRMC’s main campus this fall. Construction is expected to take about one year.

The nursing home will be built on land owned by Crosby Senior Services, a partnership between CRMC and Presbyterian Homes & Services.

Designed by BKV Architecture of Minneapolis, the new nursing home will have more of a neighborhood feel where residents have privacy and dignity, yet short distances to meet and connect with other residents. There will be lounge areas, a therapy room, central dining room, touch down nursing stations, outdoor living spaces and views, and mainly private rooms. The wing will also have a centralized nursing station for better staff efficiency and training space for staff. There will be 54 licensed beds, 48 of which are private rooms and three of which are double rooms. The Care Center’s current average daily census is 40 residents.

According to CRMC, their current Care Center was built in 1962 and cannot be expanded at its current site because of congestion, required repairs, and structural issues. In addition, the current Care Center’s design is outdated and does not support resident independence and privacy. Many of the resident rooms and showers are shared, there are narrow bathroom doorways, long hallways, lack of common areas, storages, and offices.

“Long-term care has evolved over the last 60 years and CRMC needs to evolve with it,” said CEO Amy Hart in a press release. “Creating Heartwood Phase II allows CRMC to fulfill its mission of accommodating residents with care and compassion.”