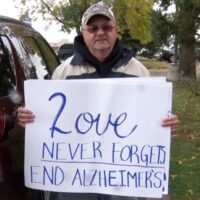 September is Alzheimer’s Awareness Month. One man took a journey across multiple states to raise awareness for the disease after his wife was diagnosed.

Lisa Millsap was diagnosed with early-onset Alzheimer’s Disease at the age of 55 in 2015. They used to have a routine involving an adult daycare program, but following COVID-19 closures, they no longer were able to attend. The quick change in routine was not helpful for Lisa’s care, and her care team has seen her health decline since the beginning of the pandemic.

Alzheimer’s Association Care Consultant Audrey Williamson has seen one constant through the couple’s journey: Mel Millsap’s devotion to his wife. Becoming the primary caretaker for his wife was not an easy transition for Mel, as Alzheimer’s is a disease that comes with its own set of challenges. Luckily, Mel has one important thing to keep himself motivated when caretaking gets tough – the love he has for his wife of 40 years.

The couple decided this year to take one last trip to see the fall colors in the northern United States, because travel was always important to them. But this trip isn’t just for the couple, as Mel is also hoping to raise awareness for the Alzheimer’s Association and the 5.8 million people who suffer from Alzheimer’s in America.