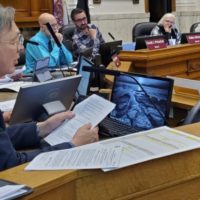 After Brainerd Mayor Ed Menk announced his resignation last month, city council members are accepting applicants to take over mayoral duties for the rest of the year.

Menk announced his impending resignation on February 18th, after explaining the need to downsize his responsibilities.

“Brainerd residents who are interested in applying must be over 21, and residents can submit an application starting today until March 18th at 4:30 p.m.,” said Brainerd City Administrator Jennifer Bergman.

City council members will vote among the applicants at the Crow Wing County Historic Courthouse to appoint a mayor on March 23rd. Once the mayor completes the term at the end of the year, a special election will be held in November to finish out the remainder of Menk’s terms, which last until December 31, 2022.