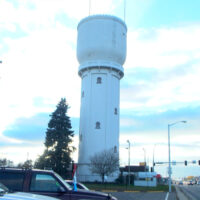 With enough funds raised, construction work on the historic Brainerd Water Tower has finally started. To prevent water damage, the water tower will receive a synthetic rubber material to replace old brick as its roof.

Known as the symbol of the city, the Brainerd Water Tower is over 100 years old. The plan to repair and restore the water tower goes back to 2014. In the last four years, the committee to save the water tower has been fundraising and has asked for grants to pay for supplies and construction services and to the project up and running.

Now that they have the funds, they are in the process of putting a rubber roof inside the top of the bowl. Work is currently being done on removing a six-foot layer of brick, and once that has been done, they will installing metal supports for the roof.

Once the project has been completed, organizers hope to give the public a glimpse on what has been accomplished, but the challenging part is, how?

“It’s tough because it’s actually attached to a private business, but we’re hopeful that we can come up with something to give people a chance to get in there and at least take a look up,” said Brainerd mayor Dave Badeaux. “Probably won’t be able to climb the stairs for insurance purposes, but at least [it will give] people an opportunity.”

With the historic tower being the first of its kind in the world, Brainerd hopes others will see how important restoring this landmark is.

There is no set date for completion, but organizers estimate the project to be done in about five weeks.