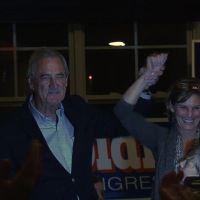 Just before 1 AM this morning it was announced, Minnesota’s 8th district representative Rick Nolan won reelection.
Congressman Nolan says, “You know with a victory like this comes greater sense of obligation. People place their confidence and their trust in you. So I think with that comes a greater sense of responsibility.”
It was a nail biter all night. Congressman Nolan and his supports watched the results from Arrowwood Lodge in Baxter. And shortly after he won he thanked his family, friends, staff and volunteers for their support during the campaign.
Congressman Nolan says, “I think we won this because we did a good job for the last couple of years. But, you know family friends and volunteers, they all stepped up in ways that wasn’t even imaginable to do everything they could to help us win this. ”
Congressman Nolan won’t celebrate this victory for too long. He’ll take some time off with his family this weekend for the Deer Opener. But then he says he’s got to get back to work representing Minnesotans.
Congressman Nolan says, “I’m going to be out in the woods chasing the wile whitetails. And then we’re going to take some time for some duck hunting too. So I’m looking forward to that. I’ve been hunting all my life. But I want to put a tremendous push on my Restore Democracy Act to change the way we do politics. People understandably have had it with these millions and millions of outside independent dollars that are coming in and as I said before, not only polluting the airwaves but corrupting the political process.”
And Congressman Nolan was quick complement Republican challenger Stewart Mills and says this was one of the closest races he’s ever fought.
Congressman Nolan says, “He did extremely well. This is the toughest race I’ve ever been in. And you have to take your hat off to anybody who’s willing to throw their hat in the ring and throw their ideas out there and put their good name and good reputation out there. And I applaud Stewart Mills for having done that.”
In a statement Mr. Mills says, “It is my sincere hope that Congressman Nolan works over the next two years to address the real concerns that many people in our part of Minnesota have brought up over the last year, and that he works to represent every voice in the 8th District.”