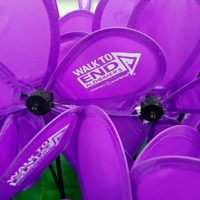 Hundreds of people gathered Saturday morning during the Walk to End Alzheimer’s to raise money to fight a disease that affects tens of thousands of Minnesotans. Alzheimer’s disease is the sixth leading cause of death in the United States, and the only one in the top ten without a known treatment or cure. The Alzheimer’s Association is trying to change that.

The Walk to End Alzheimer’s is an annual event where teams come together to walk and raise money for the Alzheimer’s Association in the Brainerd Lakes Area.

“It’s time to start talking about it. There still is a stigma with Alzheimer’s disease and we are breaking that by talking about it and bringing that awareness,” explained Brenda Conley, Community Engagement Manager for the Alzheimer’s Association in Brainerd.

“We want people to understand the disease so they’ll get help sooner and we educate doctors. We have doctors coming to us and we talk to them about how to educate their patients,” added Lou Owens, the chairperson of the Walk to End Alzheimer’s.

So many families are affected by Alzheimer’s and dementia, and hundreds of people were at the event to show support.

“Everyone in this room right now is family. They all understand, they care and that’s why we’re here,” said Kimberly Rollins, whose mother was recently diagnosed with early-onset Alzheimer’s.  “We’re all here looking to end this disease.”

When teams entered the event, they were invited to pick up a flower, each color of flower correlating with the reason they walk. The orange flower represented a person’s support for the cause. The yellow was for those who care for a person living with dementia or Alzheimer’s disease. The blue is for people living with the disease, and the purple is for people who have lost a loved one to Alzheimer’s or dementia.

Each year, a family is asked to be the honorary family for the event. This year, the Larson family was chosen. Donna Larson was diagnosed with early-onset Alzheimer’s disease at 63.

“I just want to show that it hits everybody, no matter what your status is in the community. No matter who you are, it can hit your family or yourself and don’t be afraid to talk about it, learn more about it,” said Kevin Larson, a member of the honorary family.

“This is huge for raising awareness, and I can’t say enough about the Brainerd Lakes community. People have really rallied around this cause and come together to make a difference,” added Conley. “We’re all working very hard to hopefully one day find the first survivor.”

For more information on the Alzheimer’s Association, visit www.alz.org. 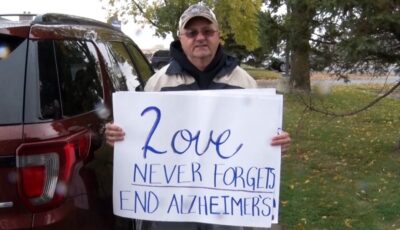