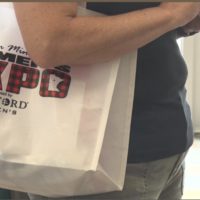 After taking a break for a few years, northern Minnesota’s largest women’s expo returned with more than 50 vendors this year.

“There’s so many different things, I learned a lot about various areas, so yeah, very good,” says Connie Moen, an attendee at this year’s women’s expo.

It’s back in Bemidji and better than ever with a variety of different vendors, classes and sessions all catering to women.

“There was one a number of years ago, and we really loved the concept and loved the idea and women getting together and experiencing women businesses,” says Tiffany Vickaryous-Hubbard, Sanford Center Director of Food and Beverage & Sales.

This year, the goal of the expo was to empower and inspire women. There were self-defense classes and appearances from women like Olympian Gigi Marvin and chef Amy Thielen. This year, the expo also gave back by partnering with local non-profits like the United Way of Bemidji and Hands Of Action International. Many of the businesses featured at the expo were also women-owned.

“It really wasn’t a lot of us picking, it was the vendors picking us. We put it out there that we were going to do this and we were looking for vendors and we had calls and emails right away,” says Vickaryous-Hubbard.

Some other things the expos featured included recipe and cooking tips, health advice, and even new ways to exercise and workout.

Vickaryous-Hubbard says, “We have vendors ranging from Mary Kay to Tupperware to Itasca Leathergoods.”

Paul Kirkman, the owner of Itasca Leathergoods, says about being a vendor in the expo, “This is the first women’s expo, so you never have any idea how it’s going to do, but the crowds have been good and we’ve made contact with so many, so we’ve had a lot of good exposure and some sales and that’s always a good thing.”

There aren’t any official numbers, but the turnout for the event was pretty large, especially with the Minnesota Fishing Opener happening on the same weekend. For some, that made it even more of a reason to attend.

“I would definitely come back. I like it on this weekend because my husband is fishing and it’s a great opportunity to for me to do something,” says Shirley Deno, another attendee at the women’s expo.

Now with the comeback year out of the way, it safe to say that the Northern Minnesota Women’s expo is here to stay. Next year, the goal is to make the show even bigger.

Vickaryous-Hubbard says, “We’ve got lots of ideas in the works for next year, so everybody will just have to stay tuned to see what we can bring up!”