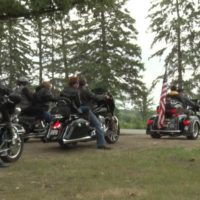 Suicide has always been a hard subject for most to talk about. Instead of avoiding the conversation, Red Lake has put their energy into bringing awareness to prevention.

“We’ve been doing this for 11 years, like, today is the 11th year, and we try and help out people that have a crisis with suicide attempts or any issues that come up. We try to help them with hotel rooms or gas money to go where they need to go,” says Bill May, one of the founders of the Red Lake Ride Against Suicide Prevention Bike Rally.

The ride is 142 miles long with five stops down Highway 89 and 32. Right after the motorcycles take off, a parade also starts in Red Lake. For many, the ride not only brings awareness, but it’s a also a way of healing. Many of the founders started it because of a tragedy that was all too common in the community.

“At the time, there were a number of people who kind of joined together, a bunch of women. They had all lost kids in their families. So what we decided to do was to take and start a motorcycle ride because a couple of the members had motorcycles and they said, ‘let’s do a motorcycle ride,”’ says Lea Perkins, another founder of the ride.

Over the years, the ride’s message has grown; this year, there were more than 60 motorcycles present.

May adds, “They’re not only Red Lake bikes. A majority of the bikes come from other areas: Bemidji, Blackduck, Clearbrook, Warroad, Thief River, Red Lake Falls, International Falls. They’re coming from all over.”

At the end of the ride, the bikers have a walleye dinner feast and a spiritual ceremony. This is where everyone is reminded of the meaning behind the prevention ride, which is to spread love and positivity.