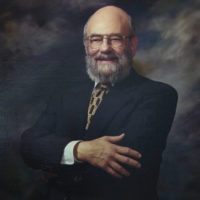 Friends and former coworkers are remembering Joe Plut, also known as “The Mad Hugger”, who passed away from prostate cancer at the age of 82.

Plut worked as an English instructor at Central Lakes College for over thirty years. He greeted every person, including every student he had, with a hug, which gave him the name “The Mad Hugger.” His popularity led to an appearance on the NBC television show “Real People” and an interview with People Magazine.

“When I think about him I think of that laugh of his, which was just marvelous, and the way that he made everybody feel like they were the only person in the room that mattered to him. He was everybody’s best friend or you were the best friend of Joe if you knew him,” said Patrick Spradlin, a Central Lakes College Theater Instructor who worked with Plut. “It’s sad that he’s gone but he left behind quite a legacy that really warms our hearts.”

Plut made a huge impact on the Brainerd Lakes Area and Central Lakes College where he started a scholarship fund that has grown to more than $50,000. According to his friends, Joe made everyone he came into contact with feel like they were the most important person in the room.

“He founded a scholarship fund here which they had the world’s largest group hug, I believe, to raise money for that a few years ago. He was instrumental in promoting the arts and in promoting culture here at the college. He just was – I don’t know how best to describe it except just to say he was a strong, driving force for everything that is good and kind,” added Spradlin.

A visitation and funeral for Plut will be held this weekend in Crosby.