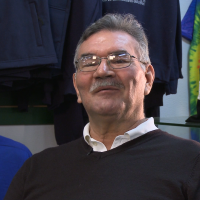 Meet the creator of a remarkable Corn Maze as Common Ground visits Carter’s Red Wagon Farm in Park Rapids, listen in as Warroad Hockey legend Henry Boucha shares the amazing saga of his life and enjoy the art created by staff and faculty at Bemidji State University all in one packed episode.

Farmers Tony and Linda Carter have created a pumpkin festival in Park Rapids that draws visitors from far and wide and the Corn Maze is only part of the story. Viewers get to observe the process over a four month span as the maze develops and culminates in an October Pumpkin Party for all ages that includes Rube Goldberg-like contraptions and a themed hayride.

The show then steps across to the Ramsey Gallery at Bemidji State University to view staff and faculty art at the Mid-Winter Interlude and concludes with Warroad Hockey legend Henry Boucha.

Native American Olympian Henry Boucha won a silver medal in 1972, played in the NHL for the Detroit Redwings and while playing for the Minnesota North Stars suffered an eye injury that ultimately took him out of the game in 1977. Boucha, who is a U.S. Hockey Hall of Famer, has recently published his autobiography Henry Boucha, Ojibwa: Native American Olympian. He talks to Common Ground about the triumphs and tragedies of his life and tells the story of his struggle to connect with his Indian heritage.