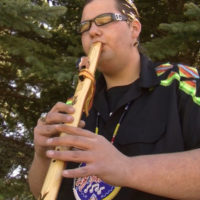 Common Ground follows the process as a theater evangelist initiates second graders into the joys of performing theater and in part two meets an award winning Native American flutist.

Cate Belleveau, a long time Bemidji theatre advocate, shares her passion with Solway Elementary School students as they rehearse a Pirate play she adapted for them.

The enthusiasm which Belleveau has for the performing arts is infectious and viewers get to watch as the kids catch on.

In part two, flutist Cody Blackbird shares the story of his most recent Native American Music Award and steps into the summer sunshine to create some original music specially for viewers. Blackbird, from Bemidji, is Eastern Band of Cherokee and in 2011 was the youngest person ever to receive the Flutist of the Year Award at NAMA.