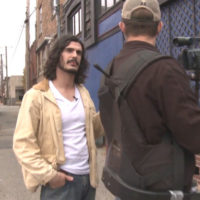 We join Bemidji Film-makers Mike Bredon and Gary Burger as they create very different types of films. Burger works on his sequel to Bemidji: Between the Wars, recreating historic scenes from our region’s past. Mike Bredon, not only shoots video for both of Burger’s historical Bemidji films, but also works tirelessly to complete a labor of love; an independent zombie film. Young and sensitive viewers be advised, this episode contains behind-the-scenes footage of zombie movie gore.