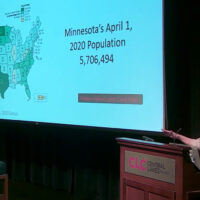 Brower familiarized her audience on why a census is taken every decade. The first of many reasons is for political apportionment and political representation. The U.S. Census is also used for funding billions of dollars that rests on the headcount that is taken every 10 years to contribute towards certain state and federal funds.

From the last census taken in 2020, Minnesota has done well in terms of population growth. On a map shown by Brower during the presentation, Minnesota is colored in a lighter green compared to states that have seen tremendous growth like Texas and Nevada, which are colored in a darker green hue. Overall, Minnesota is about at the national average in terms of growth.

Regarding population changes, the main driver is not due to young people going off to college. Instead, it has everything to do with the elderly. There are older people in high mortality age groups, meaning that these people are living and dying in their communities. This makes a community hard to thrive and grow in rural areas.

The next Rosenmeier Forum on Nov. 30 will host former State Department official Thomas Hanson. It will be held at the Chalberg Theatre at CLC’s Brainerd campus at 7 p.m.