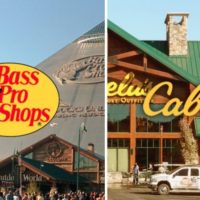 Bass Pro Shops bought Cabela’s Inc. in a $5.5 billion valued deal. This agreement will combine the two top hunting and fishing retailers in the U.S.

With the addition of Cabela’s 85 stores, Bass Pro Shops will double its store count in North America.

According to the Brainerd Dispatch, “The deal comes nearly a year after activist hedge fund Elliott Management said it had taken an 11.1 percent stake in the company and called for a sale. Two months later, Cabela’s said it would explore strategic alternatives.”

Cabela’s apparently has struggled with declining sales of apparel and footwear. With this new agreement their company is estimated to make $419.2 million from the deal.

Bass Pro Shops was founded by Johnny Morris in the 70s. It was originally a fishing gear shop in his father’s liquor store.

With the new deal, Morris hopes for Bass Pro Shops  to become a place for expert advice, shopping, and entertainment.

Morris will be the Chief Executive of the newly combined company.