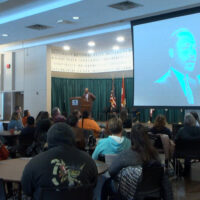 “We were really just hoping to spread knowledge, awareness, education, for the different types of activists that were, you know, present during the time,” said BSU Black Student Union Vice President Michael Bailey, Jr.

The event featured a performance from BSU’s Blue Ice Jazz Band, speakers from BSU’s Black Student Union, and the event’s keynote speaker, author and educator Dante King, who spoke about racism through the legal lens. The presentation also touched on Dr. King’s shift from addressing civil inequality to systemic inequality later in his life.

“Dr. King, in his later years, he began to talk about how he had under-evaluated the situation of racism and what it really was,” said Dante King. “And so he was saying he understood it as civil abuses, you know, these were civil rights problems – no, they are greater than that.”

What was perhaps most touching about this celebration was seeing how its attendees were willing to face hard truths about racism in the U.S.

“It’s ecstatic, it makes me happy a lot, really, it really does,” said BSU Black Student Union President Maalik Knox. “We can really, you know, show that diversity is strong in such a rural area in northern Minnesota.”

Representatives from BSU’s Black Student Union will also be holding a number of events like this in February in honor of Black History Month.