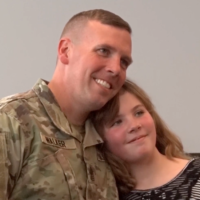 A Brainerd area National Guard soldier returned home today to surprise his 4th grade daughter while she was in class.

Steve Walker has served for 19 years in the Army National Guard, and he returned home from Kuwait today after his third deployment. It was his longest deployment, and he said the hardest thing about serving is being away from your family.

This afternoon, Walker was able to surprise his daughter Addison while she was reading in Baxter Elementary’s library. Addison’s stepmom reached out to the school to set up the surprise with the principal, and they were more than happy to reunite Addison with her father.

After hugging his daughter, Walker spoke with the other kids in the classroom, answering their questions about the Army National Guard. It was a very special treat for Addison in more than one way, as her school day got to end a little early so she could get some ice cream and spend some quality time with her dad.