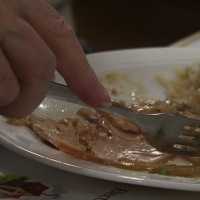 It’s becoming a Brainerd tradition; for the fifth time, the Brainerd American Legion, VFW, Eagles Club, and Elks Lodge hosted a community Thanksgiving dinner. About 550 people were fed a full Thanksgiving dinner through delivery, carry out, and dine-ins by these four organizations from 11 until 1 today.

American Legion Post 255 General Manager Janelle Fitch talked about why it’s important for them to host the event every year. She said it’s “to bring the community together. To get meals out to people who can’t get out. It shows them a smiling face, someone saying Happy Thanksgiving to them.”

Like most Thanksgiving meals, there would be no end result without hard work, but food, and the sense of family, are still the main attraction.

Olga Olson, Aubrey Koman, and Gary West each had their own specific food they liked from Thanksgiving. Olson said “of course I like the meat and potatoes, but pumpkin pie with ice cream on it, or cream on it is really good.” Meanwhile, Koman said hers was “turkey and mashed potatoes and gravy.” When asked why she simply said “because I don’t make it very often. In fact, I never make it, so it’s a special treat.” But West had a little different reason for his food. He said his was the pecan pie. He then laughed out loud as he explained “because it’s got everything my doctor said I’m not supposed to have.”

While the food is delicious, this is still a time when a sense of family matters the most, and giving back to the community just as important. The event has grown each of the five years they have held it, and they hope to continue that trend in the years to come.

When asked why a sense of family and going to get food at an event like this is so important around this time of the year, Paulette Thoennes, who is the Volunteer Coordinator, said “it builds community, you’ve got the closeness.” She went on to say “maybe today you don’t need the help, but tomorrow you will, and this way you’ve put a face with a name and met your neighbor.” She also said “we’re just holding on together, and no matter what need you’re in, it’s fulfilled.”

The event has grown each of the five years they’ve held it, and they hope to continue that trend in the years to come.