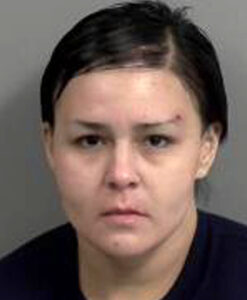 A Bemidji woman is facing felony charges of child neglect after the death of her one-and-a-half-year-old son.

According to court documents, 29-year-old Lakeisha Dawn Chaboyea is charged with one count of neglect of a child that resulted in substantial harm of physical/emotional health. Chaboyea reportedly willfully deprived the child of necessary health care or supervision.

On December 31, 2022, at approximately 1:15 p.m., Bemidji law enforcement responded to an incident at Chaboyea’s residence. Upon arriving on the scene, police learned that Chaboyea’s child was unresponsive and not breathing. The child was possibly exposed to fentanyl.

The criminal complaints says while trying to resuscitate the child, officers heard Chaboyea on the phone telling the person on the other end the child must have gotten a piece of tinfoil from the trash that was used to ingest drugs. The victim was then transported to Sanford Health in Bemidji for additional care.

When speaking to law enforcement, Chaboyea informed them that she had smoked fentanyl with a “number of friends at her residence approximately 3 days earlier.” The complaint says that Chaboyea stated they used a piece of tinfoil to smoke off of, but they did not finish smoking it as the product was very strong. The product was then disposed of in the trash can.

At approximately 1 p.m. the child began to show signs of worsening conditions. The victim was soon unresponsive. Roughly five hours after the initial overdose, 911 was contacted.

After being transported to Sanford Health in Bemidji, first responders and medical staff used a ventilator to get the child breathing. They then transferred the child to a Fargo hospital as he was in critical condition. Blood and/or urine samples confirmed the child had fentanyl and methamphetamine in his system.

According to the Beltrami County Attorney’s Office, Chaboyea is set to appear in court for her initial appearance on January 23. The child neglect charges carries a maximum sentence of five years in prison and/or a $10,000 fine.

An obituary for the child confirmed his death on January 4, 2023 in Fargo, ND. A wake took place on Tuesday, January 10 at the Red Lake Community Center. A funeral service will take place on Thursday, January 12 starting at 12 p.m. at the same location.