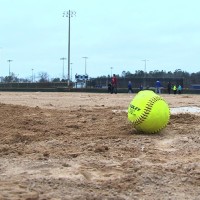 “I think the biggest thing is just knowing that you’ve done it,” said head coach Brad Takkunen. “Now you can have more of a focus in your workouts.”

“It’s definitely not as much pressure,“ said senior Gabbi Takkunen. “We know that we have the ability to so we just have to trust ourselves. It’s nice to know that we’re able to do it.”

The team knows it has to be on the top of its game this year, as every team will be giving the defending champs their best shot.

“Teams are out there to get us this year, so we’re trying to stay really focused and working very hard to show them what we have,” said senior Evette Morgan.

Offensively, the team returns three of their top four hitters and boasts a lineup that can beat you in multiple ways.

“The starting lineup is going to be mostly small ball and running the bases, and we have a couple of girls coming in who are pretty powerful,” said Morgan, who hit .578 in the regular season last year.

The pitching staff is fully intact from last year, as Gabbi Takkunen, Maddie Hanson, and Evette Morgan all return after throwing more than 20 innings for the team last season.

“It’s definitely super nice to have a bunch of different pitchers who are able to throw off the team so they don’t know what to expect,” said Gabbi Takkunen.

The team thinks that if they play their game, they have the formula needed to make another run deep in the playoffs this season.