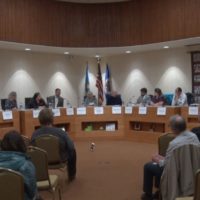 Eight candidates made their case to the Bemidji community tonight in hopes of becoming a member of the Bemidji School Board.

There are only three open seats on the board this year. A few running have already served on the board, while a majority of the candidates will be newcomers if elected. The forum covered a range of topics, including what they think is the biggest problem facing our schools.

Candiate Gary Rozman says, “I’d like to increase civics education. I’d like to focus on cyber security in our schools.”

Bonnie Solomon, another candidate, says, “Graduation – you know, getting the numbers up as far as graduation levels so these kids can go on and move into different higher education.”

“We need to graduate and so I think probably our biggest issue is our achievement gap issues,” says Shawn Whiting, another candidate and current member of the school board.

“That has to do with the mental health challenges that our students face and I don’t think that, although we have some support in the schools, I don’t think it’s addressed enough,” adds candidate Sarah Young.

“We need to attend so attendance ties into that. We also need to be proficient in those things that are tested – math, reading, science in order to graduate,” says candidate Jack Aakhus.

Carol L. Johnson, the current school board chairperson and candidate, says, “Graduation rates is definitely one of our biggest concerns. Our hope is to get our graduation rate for our subgroups above 67 percent.”

Candidate Wenona Kingbird says, “The achievement gap between indigenous students has come up and along with, I mean, there’s so much more to it than just that. We need to take a look at the discipline disparity that happens with indigenous students.”