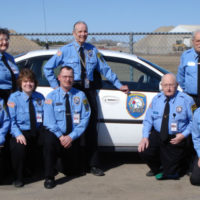 It was business as usual at Monday’s Bemidji City Council meeting, but then came the announcement that a long standing tradition of volunteer service would come to an end.

Dressed in full uniform, the remaining nine volunteer members of the Citizens Patrol announced that the program was ending, gave a final salute, and said farewell – but not without receiving a standing ovation from the city council.

Out of the nine members of the patrol, four of them have been part of the organization since its inception. Since 1997, the program grew and become part of the law enforcement community.

For those who were part of the program from day one, they each had their own reason why they joined.

It is bittersweet for these devoted volunteers. They gave so much of their own time, but in return became a big part of the community.

With the Bemidji Citizens Patrol coming to an end, the City of Bemidji is looking for new ways to provide that extra security through the use of the police reserves.

Bemidji Police Chief Mike Mastin recognized each member of the Citizens Patrol and thanked them for their service by presenting them each with a certificate and challenge coin.

The Bemidji Citizens Patrol will officially be disbanded on August 31st.