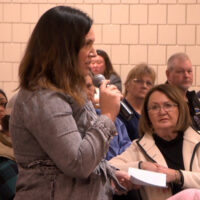 Bemidji Residents Speak Out at Meeting on Proposed Sanford-Fairview Merger

Minnesota attorney general Keith Ellison visited Bemidji on Tuesday for the second of four meetings regarding the proposed merger between Sanford Health and Fairview Health Services.

Since its announcement last November, the proposed merger of Sanford and Fairview’s health systems has drawn plenty of attention, including that of the Minnesota Attorney General’s Office.

“We are in an investigative stage, this is our obligation to do due diligence first,” said Ellison to the crowd present at Bemidji State University’s Beaux Arts Ballroom. “We’re walking into this meeting tonight with an open mind, we want to hear from everyone we can, and we want to make sure that Sanford and Fairview, who have proposed this merger, have their say as well.”

During the hearing, Ellison and his team heard differing opinions on the possible merger from community members, including those in favor of the move.

“This merger would allow Sanford to share and demonstrate our mission with a much larger number of people,” said Sanford Health Guest Services employee David Carter. “So if this merger were to happen, in my opinion the patients would win.”

“It could be better for our Minnesota young people, and we can find more of them in the future in healthcare, and the only future we really have is our young people, so what we can do to help them can help all of us,” said Sanford Health board member Andy Wells.

But with opinions mixed at the meeting, some in attendance were forceful in speaking out against the merger.

“Sanford needs to focus on attracting and retaining staff to come and work here. Any extra money Sanford has should be spent on this, not the merger,” said Minnesota Nurses Association member Jean Forman. “When Sanford freely chooses to take care of their current employees and this community, then, and only then, should they have the audacity to propose a merger such as this. Patients should be before profits. This community deserves better.”

While these community input sessions are the first of many steps to investigate the merger, the Attorney General’s Office states that they want to ensure the voices of Minnesotans were heard.

“We want to make sure that people who may support, or people who may have misgivings about this proposal, have their fair say as well. What I ask for everyone to be respectful to everyone, even if you hear something you disagree with,” said Ellison.

The next meeting will be held at Worthington High School on Wednesday, Jan. 25.