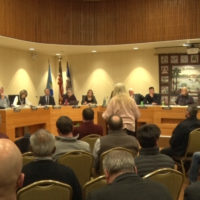 The Bemidji City Council chambers at City Hall were packed with concerned residents during today’s City Council meeting to discuss a topic that wasn’t even on the agenda.

People took to the podium to tell council members to take a stance on the executive order of local involvement in refugee resettlement, an item that is on the Beltrami County Board agenda for tomorrow. There were people both for and against the agenda item. Bemidji Mayor Rita Albrecht says the council has never discussed the idea of refugee settlement.

Beltrami County Commissioners will vote on this topic tomorrow in the County Board room at the County Administration Building at 5 p.m.