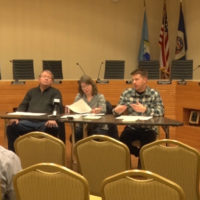 One of the rules bans these vehicles from parking on or within limits of any street or right-of-way between 10 p.m. to 6 a.m. The committee met on Tuesday at Bemidji City Hall and heard from one resident who was in opposition of the drafted ordinance.

“My bottom line is, we try and market ourselves as this friendly community and we live on tourism we want all these people to come. And part of the attraction in college is kids can go there and be close to the outdoors and those kinds of things. And if we’re going to start creating ordinances, rules, whatever, that’s going to prohibit that, then we should not market ourselves that way,” said Bemidji resident Howard Hoody.

The ordinance came to the committee’s attention after Ward 5 councilor Nancy Erickson was made aware of an RV parked on a street that was being moved in accordance to the existing ordinance every 24 hours. Another issue brought up was the confusing signage system in the city.

“Changing signage or cleaning up signage, some of the reasons maybe, some of these big RVs on side streets are more of a safety issue because they’re so big and they take up quite a bit of the road, they might be a signage up on certain roads that just say ‘no parking over-sized vehicles,’” said Ward 5 City Council Member Ron Johnson.

Committee recommended to change nothing in the current parking ordinance and will re-address the issue during the city council meeting on December 16.