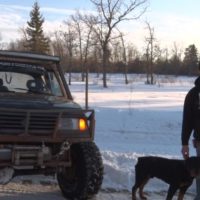 Bemidji Man Takes Towing Into His Own Hands

Despite warmer weather, tow companies are still plenty busy helping drivers out on the roads. Instead of paying costs upwards of $100 just to get out of a ditch, many are giving Kelly Rust a call.

But Kelly isn’t with a towing service – it’s just him and his 1990 Suzuki Sidekick.

People message him on Facebook, letting him know that they could use a jump start or help getting out of the snow. One woman had her car jumped by Kelly four times so far.

Once he started her car again, Kelly got his second call of the day. After passing by a car stuck in the snow, one driver knew just who to call.

And while some passing by had doubts that the Sidekick could get a Ford Truck out of the snow, sure enough, Kelly was able to get the truck out.

While the driver from Florida seemed a little embarrassed by it all, Mostoller says he’s glad Kelly was around to help.

When Kelly isn’t responding to messages, he says he he’ll just drive around, finding those who are stuck and needing his services. He says while he enjoys helping others, it has also helped him get out of the house after suffering a work injury.

One woman, who didn’t want to be interviewed on camera, says giving a few dollars for his work is a far cry from the money you’d pay otherwise. As Kelly says, not everyone can afford such a bill.

Minnesota State Patrol suggests packing an emergency kit for your vehicle should you be involved in a crash or get stuck during the winter. Some items you should have on hand include a shovel, jumper cables, a basic tool kit and extra warm clothes.