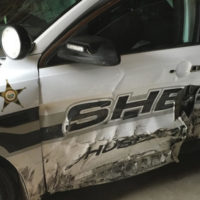 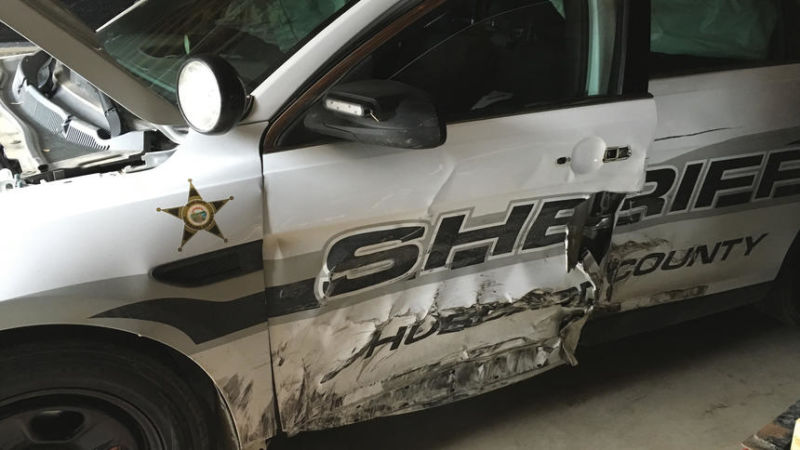 A Hubbard County Sheriff’s Office patrol car is shown here with damage from a high-speed chase which started on Highway 34 east of Park Rapids and ended with one man arrested in Walker. Photo credit: Park Rapids Enterprise 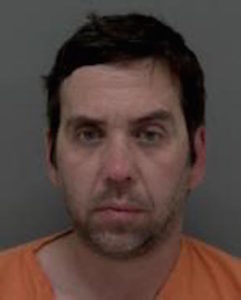 A Bemidji man was arrested after leading law enforcement on a high-speed chase through Hubbard County, then ramming his vehicle into a Hubbard County Sheriff’s Office patrol car.

Kevin Earl Victor Barsch, 42, has been charged with felony counts of second-degree assault with a deadly weapon and fleeing a police officer. He was also charged with misdemeanor driving while under the influence for refusal to submit to a chemical test.

According to a criminal complaint, a sergeant received a call at around 9 p.m. of a possible intoxicated drives traveling west on Highway 34 near Dorset Corner in Hubbard County. While enroute, the sergeant was informed the vehicle made a U-turn and was travelling east on Highway 34. He caught up to the Honda vehicle and initiated a traffic stop at Hubbard County Road 33 after observing the vehicle halfway over the fog line.

The sergeant approached the vehicle and the driver gave him a name which was not on file. He noticed a strong odor of alcohol and the driver had bloodshot watery eyes and slurred speech.

The sergeant noticed the vehicle was still in drive and he requested the driver to put the vehicle in park. Barsch then, according to the complaint, took off at a high rate of speed. The sergeant pursued with his lights and siren on and Barsch accelerated to over 110 m.p.h. eastbound on Highway 34.

The vehicle slowed and the sergeant pulled in front in an attempt to stop the vehicle. Barsch then accelerated and intentionally struck the patrol car on the passenger’s side and continued east on Highway 34, the complaint states.

Barsch entered the city of Akeley and continued at a high speed rate. The sergeant again got in front of the suspect’s vehicle, but Barsch struck the patrol car again on the driver’s side which caused the side and seat airbags to deploy, disabling the patrol car.

Other officers continued the pursuit toward the city of Walker where spike strips were successfully deployed, deflating the tires.

The suspect vehicle went into the ditch and back on the roadway before Barsch was taken into custody and transported to Hubbard County jail.

Barsch failed field sobriety tests and refused a breath test, according to the complaint. Barsch later admitted in an interview that he struck and fled because he was scared.

The sergeant was not injured but was sore that night and the next night due to impact, the complaint states.

Barsch has a prior DWI conviction within the previous 10 years.

Barsch appeared in court on Monday and the judge set $40,000 unconditional and $30,000 with conditions.