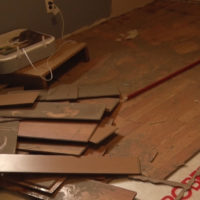 “6 inches seeped into everything, so anything that was touching the floor was affected. So any of the laundry that I had on the floor in the laundry room, any of the clothes the kids left on the bathroom floor. The bathmats, the carpeting, all the wood flooring,” says Crystal Hegg, whose home was affected by the water main break.

It’s been exactly two weeks since a water main broke in a Nymore neighborhood that left many homes flooded with raw sewage. Without any word about who will take responsibly for the break, many residents have taken it upon themselves the fix the damage.

“I kind of waited and waited and I thought, ‘I can’t stand the smell anymore,’ so I thought we’ve got to get something done and get it cleaned up. I can’t wait. How long am I going to have to wait? So we did have ServiceMaster come over the other day and clean it up so it smells a lot better down there,” says Jackie Moe, another person whose home was affected.

Lakeland News spent the day talking to many neighbors who were affected by the break. We’re told there are around 14 homes that suffered and the damage for the entire neighborhood is equal to around $1 million.

The Hegg family was hit particularly hard. They’ve been forced to sleep in a camper because of all the toxins in their home. When they do have to go inside, it’s recommended that they were HAZMAT suits and masks. They have insurance, but it’s not covering everything.

Hegg says, “When we found out that we had to stay within the limits of our policy and nothing was being taken care of right from the get go, then we knew we had to limit our expenses. So that’s when we decided to undertake the cleaning myself and we started arranging for dump trailers for all the unsalvageable things.”

Cleaning bills are racking up for many homeowners. A lot of them are keeping lists of the costs in hopes they’ll get reimbursed. A few have been in contact with City of Bemidji officials, but say not much progress has been made.

“They came by and we were told to call the city and get a number from them. As far as getting more information or getting some help for someone to come out and sanitize, and they just told us that you need to sanitize it because it’s raw sewage,” says homeowner Marilyn Martin.

Without answers as to when things will start moving, many are being hopeful, but mold and toxins are starting to grow, and some don’t know how patient they can be.

“I know we’re not the only ones with this much damage and this many problems, and I hope we hear something soon because we’re coming into summer and there’s still a lot to do. I’m only one person,” says Hegg.

Attempts to reach the City Of Bemidji today were unsuccessful. A few neighbors have been told that the city is still investigating the incident.