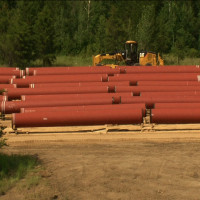 It didn’t matter if you’re for or against the Enbridge Line 3 Replacement Project – everyone received three minutes to share their stance at a public hearing at the Sanford Center in Bemidji.

Bemidji was the sixth of nine public hearings addressing the topic. Attendees spoke in front of a panel including members from Enbridge and the state’s commerce department.

In April 2015, Enbridge filed an application for a certificate of need and route permit for the pipeline. An administrative law judge heard public comments and then will compile a report for the Public Utilities Commission.

Enbridge has operated pipelines for more than 60 years. The current Line 3 pipeline transports crude oil from Canada through Minnesota to Wisconsin. The proposed project will have a new preferred route.

“We will route next to our main line system to Clearbrook and then head south down toward Park Rapids and then we take an easterly route into Duluth and Superior,” said Gustafson.

The replacement has a price tag of nearly $3 billion that Enbridge would cover, and some see the potential economic boost it would bring.

“As a result of this two-year construction project, we’re 6,100 jobs created for Minnesotans,” said Jobs For Minnesotans chairperson Nancy Norr. “Some of those are direct jobs related to the project, others are spin-off jobs created due to the payroll and the investment that’s infused into our regional economy.”

This isn’t the first hearing for Northern Water Alliance of Minnesota founder Mary Ackerman. In fact, she calls herself a many timer because she’s been to several. She also represents property lake owners and says she supports an alternative.

“A longer route, a straighter route and not through wetlands and lakes,” said Ackerman.

Brent Murcia, a Youth Climate Intervenor, also added his thoughts on a possible new pipeline. “Of course, the impact of spills, to drinking water and to wild rice, which are obviously very important to all of us.”

At the hearing, the majority of people in attendance were supporters of Line 3, and some Enbridge employees wore lime green shirts. The reason many were behind Line 3 ranged from tax revenue to petroleum products.

“I encourage the need for this line replacement,” said Rep. Matt Grossell (R), District 2-A.

The opposition of Line 3 carried over outside of the Sanford Center, and one group wanted to get their point across with a giant loon.

“In regards to [Gov. Dayton’s] “25 BY 25″ for our water, but in order to see that through, we need to say no to Line 3,” said Indigenous Peoples Circle Executive Director Sheila Lamb.

The next public hearing is scheduled for tomorrow in Duluth before wrapping up in Cross Lake and St. Cloud the following week. 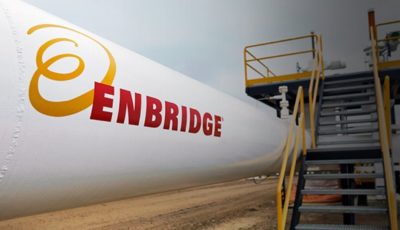