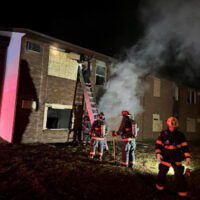 The Bemidji Fire Department responded to report of a fire at a Ridgeway Apartment building almost four hours after the initial fire. 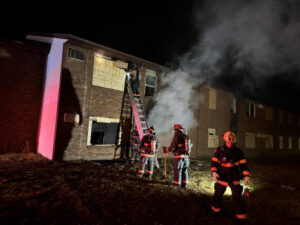 According to the press release from Chief Justin Sherwood, on November 3rd at approximately 11:03 p.m., firefighters responded to a report of a second fire at 2830 Ridgeway Avenue NW. Upon arrival to the scene, firefighters saw heavy fire and smoke coming from the first floor of the two-story, multi-family structure. The emergency personnel then used a transitional type fire attack, removing plywood from the closed off building’s windows to attack the fire from the exterior. Firefighters then moved to attack the fire inside of the building.

Approximately 20 firefighters and six pieces of equipment were on the scene for around two hours. No injuries are reported. The apartment complex and its contents did suffer severe damage.

These fires occurred about two weeks after the White Earth Nation purchased the buildings in order to renovate them into a sober living community.

The cause of the fire is currently under investigation.