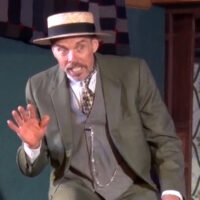 The Bemidji Community Theater will be breaking in their new facility and opening their doors to the public tomorrow night, Friday, November 12th for their production of The Music Man. 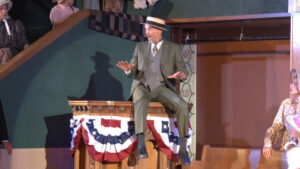 It has been a long 18 months waiting for the Bemidji Community Theater to be ready for Meredith Willson’s classic musical, but it is sure to be an up-close hit to its audience tomorrow evening. This show is about a traveling salesman, Professor Harold Hill, played by John Henningsgaard, who comes to River City, Iowa in 1912 to sell its residents on the idea of a kid’s band.

Musical Director and Set Designer Mary Knox-Johnson says that this is also a love story between professor Harold Hill and Marian (Paroo) the Librarian, who is played by Mary Anderson. With 30 cast members, and over 15 members running the show, this classic has lots of fun dancing, laughter, incredible sets and costumes, and many catchy musical numbers.

Not only are guests getting excited for this musical, but the cast members are as well.

Mrs. Anderson (Marian the Librarian) shared that she is now 21 months free of breast cancer and is excited to be back on the stage. She also shares that this is not her first go-around. She has shared many moments with her daughter performing in plays, but what excites her this year is the opportunity to share the spotlight with her husband.