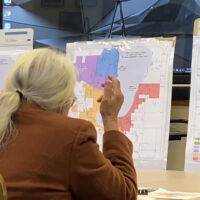 The discussion of having a new ward map revolved mainly around keeping social demographics together, particularly at Bemidji State University. A point of contention among the council is that BSU has been split between Wards 1 and 3 for years now, creating confusion among the young demographic, as many are first-time voters.

The initial map presented to the council passed in a 4-3 vote, with councilors Ron Johnson of Ward 3 and Josh Peterson of Ward 2, along with Mayor Jorge Prince, not in favor of the proposal.

Another point on the agenda included a presentation from Natasha Kingbird of the Northwest Indian Community Development Center and others on possible future plans to provide a healing house as a community resource. The house would provide a safe space for Indigenous women.

The regular meeting took place between a public affairs meeting with the sustainability committee and a closed meeting about the Bemidji Economic Development Committee. Points of interest included polling place locations and starting the process of redistricting in Bemidji.

The council tabled some items on the agenda until the next city council meeting, which will be held on April 4, during which a public hearing will be held for the redistricting of Bemidji’s wards.