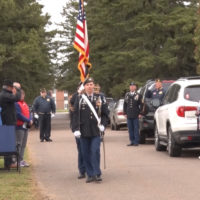 It was a somber morning at the Greenwood Cemetery in Bemidji this morning as a crowd decked in patriotic red, white and blue gathered to pay their respects to our men and women in the armed forces who made the ultimate sacrifice.

“Memorial Day is about honoring the fallen. Those who have served the country and who have died in its service. In additionally, locally we honor all the veterans who have followed, whether it’s been in—we read a list of probably 30 people that we’ve lost in the last year. That’s out of a membership of about 350,” says Bill Pagel, Commander of the Ralph Gracie Post 14 American Legion in Bemidji.

Today’s program lasted about an hour long and featured a rifle salute, posting of the colors and a wreath placement. There was also the playing of taps and a reading of Lincoln’s Gettysburg Address. Guest speaker and US Navy veteran Michael Deer spent his time at the podium making sure everyone understood the true meaning of holiday.

Deer says, “1.3 million service members have died since the found of America in our wars, and it’s due to the right of the liberties that we have now and it’s important that we pay attention to that.”

The annual Memorial Day ceremony is just one way the Legion pays tribute to our veterans. They spend the rest of the year fundraising for the community of vets in the Bemidji area.

“In the last six months, we’ve given $5,000 to the Wounded Warrior program. We’ve contributed to a trap chair so veterans can go hunting. We’ve donated to the local adult care center and we do what we can with our resources,” says Pagel.

Our flags will be flying at half staff today, but in his speech, Deer says when they return to their proud position, it’s important to take the time to remember the ultimate sacrifice.

“Perhaps it is symbolic to illustrate that while America honors the memory of these patriots, she will continue to shine because of the stand that these patriots took,” says Deer during his speech.

After the ceremony, everyone was invited to Lazy Jack’s for a lunch provided by the Legion. 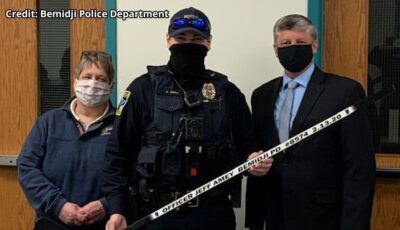