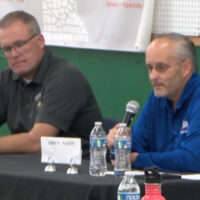 It’s a little over two weeks until Election Day, and in Beltrami County, one race that voters are keeping a close eye on is the position for sheriff.

Current Sheriff Ernie Beitel announced his retirement earlier this year. With that, potential candidates took to the field. Now, following the primaries, the two candidates that remain are Chief Deputy Jarrett Walton and Captain Jason Riggs, who both work at the Beltrami County Sheriff’s Office.

The Farmer’s Bureau in Beltrami County recently hosted a forum for the public to see and hear from their next potential sheriff. During a candidate forum held at the 4-H Building at the Beltrami County Fairgrounds, Walton and Riggs heard questions from the public and discussed a variety of important topics, including crime rates in the area.

“A lot of the crimes that we see are property-related crimes that result from people stealing to keep their habits going,” said Riggs. “You’re stealing it, or they’re selling themselves for it, and that’s exactly what’s happening and that’s we see such an exorbitant amount of crime that occurs.”

“You gotta kind of combat the root cause of everything that’s going on here, which is the chemical dependency and poverty and other things, and we work hand-in-hand with social services to try to address some of these issues as well, provide services,” said Walton. “When you have them at a touchpoint where they’re in our jail, you try to reach them, and we’ve done extensive things here in the last year, year-and-a-half, to do that. They need support, and they need accountability.”

Other topics discussed included staffing issues and relations between the sheriff’s office and area tribes.