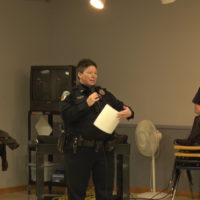 Seniors at the Bemidji Senior Center learned ways to combat scams and listened to updates from local law enforcement this week.

The Beltrami-Bemidji TRIAD invited the public to have a chance to meet with Beltrami County Sheriff Ernie Beitel and Bemidji Police Chief Mike Mastin and chat about things happening around the community. The word TRIAD encompasses three areas: community, law enforcement, and seniors.

“The intent is to build a connection with our senior population. To include them, to help communicate what’s going on in our town, directly to them. Sometimes they’re left out, sometimes they’re not as familiar with technology and not as comfortable and they can’t connect in the way most people do these days,” Mastin said.

“We’ve had vacancies with people retiring, people going to other departments, or people just in general leaving the profession, and that has really challenged us with a lot of vacancies, so this year for the police department, the whole narrative has been hiring and trying to fill those vacancies with good, quality officers,” explained Mastin.

Beitel spoke about what direction the sheriff’s office plans on taking in the future. He says they’re currently looking into leasing a body scanner for the jail. Beltrami County is one of four counties in the whole state that is looking into such an option. During his presentation, Beitel also talked about future plans for a new jail facility and some of the big changes that have happened this year, such as receiving new body cameras and completing their five-year strategic plan.

“It’s where we’ve been, where we’re at, and where we’re going. It’s a planning, it’s a living, breathing document, except it’s not taking respiration, there’s not a pulse. But the whole design is to give some direction for – not only our staff, but for the citizens, the transparency and how we operate and what direction we’re going,” Beitel said.

Another topic that was discussed during the TRIAD meeting involved some of the trends that are happening now, like scams and frauds that are targeted towards the elderly and how they can protect themselves from being victims of these scams.