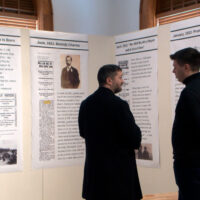 The event kicked off with the unveiling of a plaque acknowledging the Great Northern Depot’s placement on the National Register of Historic Places, followed by an exploration of the center’s exhibit on the depot, as well as a look at the History Center’s model train display.

“The [Northern] Iron Horse Model Railroad Society was also here today and opened up their model, which is usually only available on Train Days in April, so we were super excited that was available for folks to take a look at too,” said Beltrami County Historical Society Executive Director Emily Thabes.

The event also offered guests a look into the Historical Society’s archives, where over a million artifacts are currently being stored, ranging from typewriters and photographs to memorabilia from World War II.

“What we have in our exhibit space is just such a small fraction of what we actually have,” said Thabes. “But we thought today, on the birthday it was a perfect opportunity just to show folks just kind of the spectrum of the things that we keep.”

While most of the day featured a look back in history, the Historical Society also discussed their vision for the history center moving forward, citing an effort to expand the exhibit space so that more artifacts can be displayed for all to see.

“Our plans as a historical society are to try to completely revitalize and rethink our full exhibit, and sort of bring it into the 21st century,” explained Beltrami Historical Society Board President Dan Allosso.

The Beltrami County Historical Society hopes to further collaborate with the city of Bemidji so that the Great Northern Depot can become a historical and cultural hub for the city.