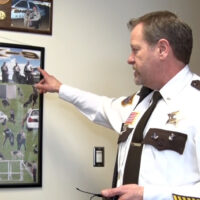 Beltrami County Sheriff Ernie Beitel announced his retirement Monday. Beitel will fully serve his final term until the end of the year.

Serving in public safety for almost 40 years, Ernie Beitel has garnered an impressive resume. From being a D.A.R.E. officer to training K-9 dogs, Beitel’s experience shows his hard work and dedication to the profession. His most recent and last feat of his career is to work as the sheriff for Beltrami County law enforcement.

Throughout the technological and personnel changes, Beitel is thrilled to see how Beltrami County’s law enforcement has become a leader in the area for public safety.

One project that Beitel highlights in his announcement is the jail project. Alongside a social worker, the Beltrami County Sheriff’s Office works to help inmates after serving time, offering more assistance to the community.

Beitel dedicates his time as an officer to his family and colleagues. The achievements of the Beltrami County Sheriff’s Office are a meaningful part of Beitel’s career. Beitel is most proud of the men and women who serve against the rise in violent crimes and keep the community safe.

Beitel encourages Chief Deputy Jarrett Walton to run for the vacant position. Current Hubbard County narcotics investigator Bidal Duran has also announced his campaign for the position of Sheriff. The election will take place on November 8, 2022.