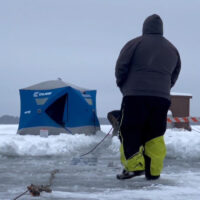 A second attempt to remove a vehicle that had gone through the ice on Lake Bemidji on Christmas Eve was unsuccessful.

Thursday evening, crew members from Ellis Towing attempted to remove the vehicle near the Diamond Point Park shoreline. At the time of the accident, the ice in that area was only four to five inches thick.

The thin ice resulted in the death of 69-year-old John Klasen III. Barricades remain in the area where the vehicle broke through the ice, and a third attempt to retrieve the vehicle will take place tomorrow.