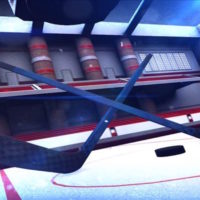 The win extended BSU’s current unbeaten streak to a season-best five games (4-0-1) as the team moved to 2-1-1 in play outside the Western Collegiate Hockey Association.

The Beavers needed just 2:50 to light the lamp. Dickman was credited with his first goal of the night and second of the year when he crashed the net with the Beavers on the rush. Nate Arentz fired a shot from the slot and the puck bounced off Dickman’s back and past the ASU goaltender. Phillip Marinaccio was also credited with an assist on the play.

The Beavers tacked on another goal before the period expired. Gerry Fitzgerald was on the back door to collect a rebound off ASU goaltender Ryland Pashovitz’s pad for his team-leading 11th goal of the season. Graeme McCormack fired the initial shot and was credited with an assist along with fellow blueliner Justin Baudry.

Despite being whistled for three penalties in the second period, the Beavers controlled play and saw its lead swell to 4-0 on a pair of goals from Ruslan Pedan. The first, also his first of 2015-16, came on a bullet from the top of the right faceoff circle that deflected off a Sun Devil defender at the 10:25 minute mark. The second came on a hard-nosed play at the 16:57 mark. On a rush, Pedan fired a shot from the slot. Pashovitz kicked the puck right back to the stick of Pedan, who again found the back of the net.

Dickman completed the scoring at the 9:04 mark of the third period.

BSU’s penalty-kill was flawless on the night, holding ASU without a power-play goal on five opportunities. The Beavers’ power play also came up dry, finishing 0-for-2 on the night.

The Beavers, now 9-9-4 on the year, host ASU again tomorrow as the team seeks its third series sweep of the season. The opening faceoff is set for 7:07 p.m. at Sanford.

All fans in attendance are encouraged to bring ice skates and “Skate with the Beavers” following the game.