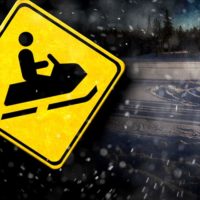 Alcohol, Excessive Speed Appear To Be Involved In Snowmobile Crash

A Brainerd man was seriously injured when he crashed his snowmobile into a parked car. According to the Brainerd Police Department, the crash happened around 10:30 Sunday evening.

Zachary James Seery, 23, was initially believed to have been traveling eastbound on “H” street when he struck an unattended, parked vehicle on the north side of the street. Seery was found barely conscious, lying in the street face down.

A helmet found at the scene led officer to believe he was wearing one at the time of the crash. However, when responding officers found the man he was not wearing it. Excessive speed and alcohol appear to have been involved in the incident.

Seery was taken by an ambulance and later transferred to an unidentified Twin Cities area hospital with serious injuries.

Both the car and snowmobile had extensive damage from the crash.

The Brainerd Police Department is continuing to investigate the incident. Anyone with information is asked to call BPD at (218) 829-2805.